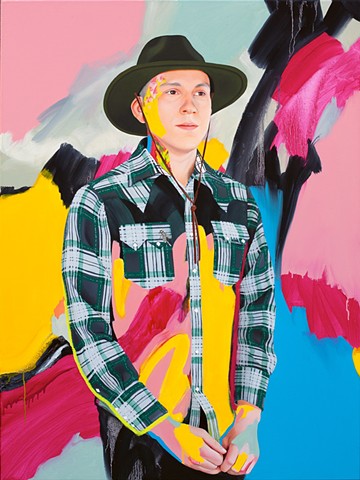 Brian Firkus is the creator of drag persona Trixie Mattel, an American drag queen, singer-songwriter, comedian, author, and television personality. Trixie is best known for being the winner of the third season of RuPaul's Drag Race All Stars. Brian (the man behind Trixie) is half Ojibwe and comes from a Native American family living in Wisconsin. He had an abusive stepfather who would call him a "trixie" when he acted feminine, which would later inspire his drag name. Brian has an incredible story, so I couldn’t resist reaching out for a portrait sitting.

This is my second portrait of Brian, the first of which portrayed him in full drag as Trixie Mattel. Our initial sitting took place backstage at the Enmore Theatre in Sydney, just before Trixie’s performance of her one-woman music and comedy show. For the second portrait sitting I traveled to the United States to meet Brian at his home in Los Angeles, California. To my surprise, he opened the front door in nothing but a towel…happy birthday to me! He then picked out an outfit that reflected his country roots, wearing a bush hat that he picked up while touring in Australia, along with a flannel shirt and a small fly pin that his friend Katya (co-host of the web series UNHhhh) gave to him. I returned to Australia to finish the painting in my home studio in Redfern.

This painting has already found a good home!